Our fully inclusive guide on how to tell the difference between mosquito bites, and bed bug bites.

Telling the difference between any kinds of insect bites when you aren’t an expert in the field can be a difficult task. This is a task which becomes even more difficult when two bites are of a similar appearance – particularly if you had been bitten at an earlier time and hadn’t noticed instantly.

Read on for our fully inclusive guide on how to tell the difference between mosquito bites, and bed bug bites.

Before delving right into the differences between mosquito bites and bed bug bites, it’s important that we can recognise the symptoms and signs of each one individually.

As you’re probably well aware – and as if their name isn’t enough of a giveaway – bedbugs are nocturnal pests who sleep in your bed. Yuck.

Their bite can resemble many skin conditions – of course mosquito bites is one of them. They can also be mistaken for other irritations such as eczema and dry skin.

But what do we look for when looking for a bed bug bite? Let’s take a look, shall we?

First up, we’re going to be discussing what their appearance is like.

At first glance, the bite of a bed bug will appear to be red and puffy. If we were to liken them to anything, we would say they resemble a spot or pimple.

In some cases, if your skin is particularly sensitive to bed bug bites, the bite itself might be filled with fluid.

How Will the Bite Feel? 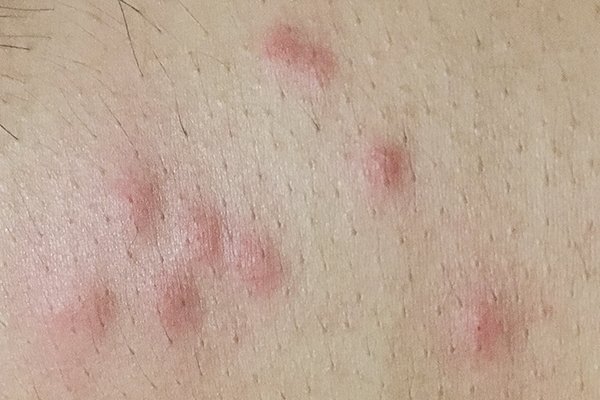 Of course, the way a bite feels can also help you decipher who the culprit was.

Usually, a bed bug bite will be very itchy and irritating. Usually the pain or itchiness will be worse in the morning, and will get slightly better as the day goes on.

Where Will the Bites be?

Usually, bed bugs will be found in areas of exposed skin that comes into contact with the bed – so it really depends on your pyjama situation for the most part!

Generally, however this will tend to be around the arms, the neck, and the face. Remember that they can also burrow under clothing too, however.

How Many Bites will a Bed Bug Leave Me With?

Different creepy crawlies will leave you with a varying degree of different bites, and furthermore, different bite mark patterns.

When it comes to bed bugs, there’ll usually be a series of bites following in a straight line. These tend to be in patches of three or more.

How Can I Tell if a Bed Bug Bite is Infected?

If you are concerned that your bed bug bite might be infected, then you should be looking for the following symptoms:

If this is the case, you may need to seek medical attention, and to be put on antibiotics.

Next up, we’re going to be taking a look at all of the above factors, however in relation to how mosquito bites are.

If you’re on the look – out for the culprit themselves, then mosquitoes are small, they fly, and they have six legs. They most commonly tend to be found near ponds, pools, lakes and marshes – so if you’ve been spending time outdoors in these locations, the chances of your bite being from a mosquito automatically increases.

Usually, to look at, a mosquito bite will be small, red, and raised.

Usually the bites vary in size. This is dependent on how the individual person’s skin reacts to the saliva of the mosquito.

How Will the Bite Feel?

Usually, the first thing you’ll notice about a mosquito bite, is that it’s extremely itchy.

However, as we mentioned above, different individuals have varying degrees of severity in relation to their reaction to the bite.

Some people who are especially sensitive to the saliva of the mosquito will actually come out in a blistering reaction.

Where Will the Bites Be?

o bites tend to be on the exposed areas of the skin. Some of the most common of these are the hands, arms, and legs.

In comparison to bed bugs, however, mosquitos will not bite through articles of clothing.

How Many Bites will a Mosquito Leave me with?

It completely depends. One person may have one mosquito bite, or they could end up with several.

Usually if there are multiple bites, the pattern is random, and not in a line like bed bug bites.

Is there a Difference in Reaction Time Between the Two Kinds of Bites?

The two differ in this capacity also, so if you can catch the culprit in the act of biting you, you should be able to tell the difference in how it feels.

A mosquito will have to have been on your skin for at least six seconds in order for it to bite you. The bites tend to be itchy and visible instantly, so you’ll notice them, and should disappear in a few days.

A bed bug bite, however, may not show up at all. In some cases they don’t cause a skin reaction – and when they do it can take several days for it to show up. It’s harder to treat bed bugs for this very reason.

Is there a Difference in Treating Both of the Bites?

When it comes to treating mosquito and bed bug bites, there is a definite difference between the two of them.

Read on to find out exactly what these are.

When it comes to treating mosquito bites, there really isn’t a lot you can do – and to be honest, there isn’t a lot that you need to do.

They can be irritating, however, so some relief will likely be welcome. This can come in the form of a antihistamine or itching relief cream.

If you don’t have any access to this straight away and need relief, then instead, you can simply apply the bite with a cloth – covered ice pack, and then be sure to keep the area clean with warm and soapy water.

When it comes to treating bed bug bites, this can be a tad more complex, however it is actually possible to do without a prescription from the doctor.

The first of these, is to apply a cold compress on the bite.

You could also try using an anti – itch cream or steroid cream as suggested above for mosquito bites. Alternatively, you could try taking an over – the – counter oral antihistamine instead. This should relieve the symptoms of itchiness and redness brought on by bed bugs.

However, it doesn’t just end there when it comes to bed bugs, unfortunately.

The issue here, is that if you think you were bitten at home in your own bed, the chances of you actually having an infestation in the house is probable – and they can be difficult critters to get rid of.

Between their feeding patterns, bed bugs can live up to as long as a year. this means that they could live in between your bed sheets, very feasibly, for a long period of time. It makes our skin crawl even thinking about it!

We would recommend calling a professional exterminator or pest removal expert if you think that your home could be infested with bed bugs. They should come and remove the main part of the issue; however it will cost you.

The work doesn’t stop there though. Following this, you should personally be meticulous in cleaning up any crevices in the bedroom in which the bed bugs could also live. This might include cushions, throws, and even sheets of paper and décor.

Finally, in the case of some bed bug bites, it might be the case that you actually should see a doctor.

This is usually when you have a bed bug bite which you suspect is becoming – or has already become – infected. The symptoms of this include the following:

Furthermore, if you aren’t one hundred percent sure your bite is the work of a bed bug and could in fact be from either a black widow spider or brown recluse spider, then you should absolutely consult your doctor. These kinds of bits can cause serious side effects and, in some cases, illness and infection. Don’t mess around if you aren’t sure.

So there you have it. that’s how you tell the difference between the similar bites of a bed bug and a mosquito.